About The Thorne Trio

THE THORNE TRIO is an established wind group formed in 1999, comprising graduates of the Royal College of Music. In their time together they have achieved success with a varied and wide range of experiences.

During their time together, The Thorne Trio was accepted onto The Blackheath Halls Young Artists Scheme, where they gave a series of recitals and education workshops and were also winners of both the Philharmonia Orchestra/Martin Music Trust Scholarship Fund Education and Outreach Award and of the Anglo-CzechSlovak Music Competition. As a result of the latter, they travelled to Prague where they gave a recital in Martinu Hall at the Liechtenstein Palace. During 2004/06 they held the post of Junior Fellows of the Royal College of Music, and more recently, were semi-finalists in the prestigious Zinetti International Chamber Music Competition in Italy.

In addition to a busy recital schedule, they are also dedicated to their education and community work. They have worked for the Yehudi Menuhin Scheme, Live Music Now!, Wigmore Hall Community and Education Department, The Council for Music in Hospitals, Cavatina Chamber Music Trust, Philharmonia Orchestra, Royal Albert Hall, Royal Welsh College of Music and Drama giving demonstrations, workshops and concerts to people of all ages throughout the United Kingdom.

The trio’s commitment to both their recital and education work, inspired them to commission a work by the British composer Cecilia McDowall, that would appeal to the audiences in both areas of their work. ‘Century Dances’ was premiered at St George’s, Brandon Hill in 2005 and has been used in the trio’s workshops and concerts ever since, all over the country.

The trio have played for a variety of audiences and clients including guests at Buckingham Palace, St. James, Kensington and Lambeth palaces. At the Houses of Parliament, Lincolns and Grays Inn, The Wallace Collection, Tate Britain, The National Gallery and the Victoria and Albert Museum and for events at The Dorchester, Four Seasons and Mandarin Oriental hotels in London.

The Thorne Trio recorded their first CD ‘3’ in The Adelina Patti Theatre in Craig Y Nos Castle. The Castle is a Victorian-Gothic country house beside the River Tawe in the upper Swansea Valley and is the former estate of opera singer Adelina Patti. The CD includes works by Mozart, Gershwin and Ibert. They are currently putting the finishing touches to their second CD recorded in 2013. A very exciting project, this CD includes not only the work, Century Dances, written for them by Cecilia McDowall but also the Britten Metamorphoses for solo Oboe and Poulenc’s Clarinet and Bassoon duet.

To listen to extracts from our repertoire, please go to our Listen page.

…a wonderful breath of fresh air. 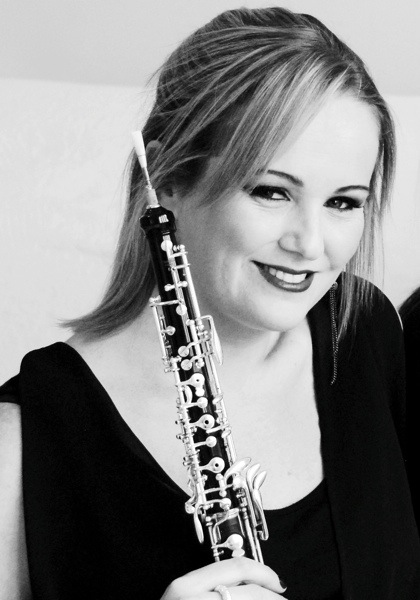 Ilid from Colwyn Bay, is a graduate of the Royal College of Music. During her studies she received many awards and prizes, including an Associated Board Scholarship, an exhibition for performance and the Joy Boughton Oboe Prize. She was also awarded the prestigious Royal College of Music Tagore Gold Medal for Outstanding Contribution to the College at the end of her studies there. As a result of her success as a soloist she has had the opportunity to play for various music societies and festivals throughout England and Wales.

Ilid has given solo recitals at St. Martin in the Fields and St. David’s Hall, Cardiff to name but a few, and recently she performed the Strauss Oboe Concerto at Cadogan Hall, and the Vaughan Williams Concerto at the Purcell Room, London with London Soloists Chamber Orchestra. She regularly plays for most of the leading British orchestras, including the London Symphony, BBC Symphony, Royal Philharmonic, BBC Philharmonic, and Royal Liverpool Philharmonic Orchestra and was a member of the European Union Youth Orchestra. 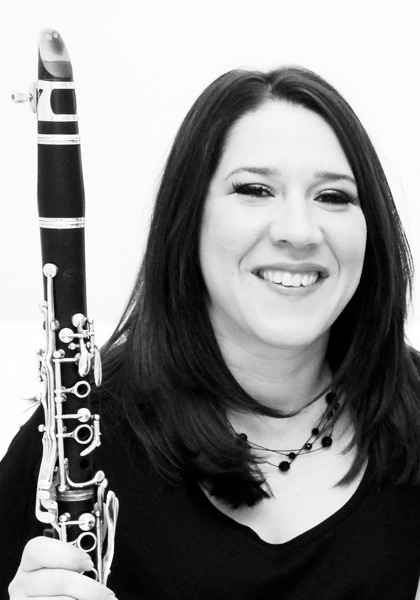 Esther is a graduate from the Royal College of Music where she studied with Timothy Lines, Colin Bradbury and Michael Harris. During her studies she was awarded several prizes and awards including a Foundation Scholarship, the Stephen Trier Bass Clarinet Prize, and the Hilda Deane Anderson Prize. She played principal clarinet and principal bass clarinet in all of the Colleges orchestras smaller ensembles, including concerts conducted by Bernard Haitink and recorded for BBC Radio 3. Through college she also had the opportunity to play with the RPO. As a freelance clarinetist, Esther has played with RTE Radio Orchestra, South Bank Sinfonia, New Professionals Ensemble, New London Soloists Orchestra regularly for many free lance orchestras and ensembles across the UK.

Esther is involved with Education and Outreach Work and works regularly for Wigmore Hall, London Symphony Orchestra and Philharmonia Orchestra. She is an associated musician for the Chance for Children Trust and has led many projects for them. In 2002 she was awarded an assistantship in Education and Community music as part of the RCM’s Junior Fellowship programme. 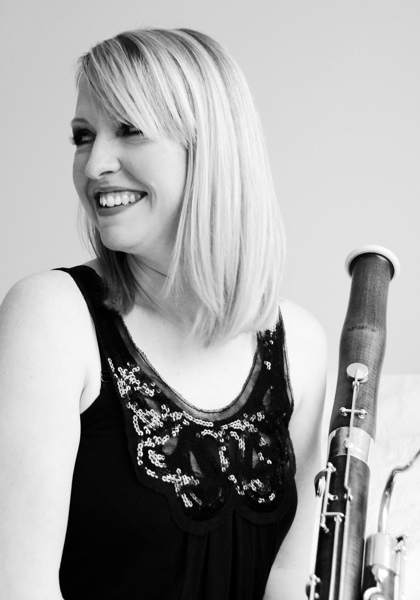 Alex is a graduate of the Royal College of Music, where she studied with Martin Gatt and Andrea di Flammeneis. Throughout her time there she was a Scholar and winner of the Fanny Hughes Bassoon Prize for two consecutive years. She also played Principal Bassoon in all the orchestras and ensembles, whilst gaining considerable experience in opera companies and orchestras elsewhere including, through College, both the RPO and LPO. Before starting College, Alex was a member of the National Youth Orchestra of Great Britain in which she played Principal for two years.

The Thorne Trio is a versatile wind group, made up of graduates of the Royal College of Music. In their time together they have had numerous performance opportunities throughout the United Kingdom. This has enabled them to accomplish their aim of bringing the lesser known trio repertoire to the forefront of the recital platform. With their continued success, has also come the opportunity to work with, and commission, new works by British Composers.

To listen to extracts from our repertoire, please go to our Listen page.

Education and outreach work has been an integral part of The Thorne Trio's development since the ensemble's formation in 1999. The audience-friendly presentation that characterised the trio's performances from the outset, allowed them to develop an approach which attempts to break down barriers – musically, culturally and socially. The Trio has worked with children as young as eight months through to groups of disadvantaged teenagers, with adolescents in hospital, and with the elderly. Artistically there is no compromise in their work: accessibility does not involve ‘dumbing down’. Whether it's Mozart or Ibert, Gershwin or a nursery tune, the only criterion for inclusion in a Thorne Trio project is enthusiasm.

“The Thorne Trio produced a very enthusiastic response from adults and children alike for their very stimulating hour, played by three very attractive performers in a most professional and accessible way.”

...a very enthusiastic response from adults and children alike.

The Thorne Trio have a wide range of experience in providing live background music of a high standard. They regulary provide music for a variety of events including wedding ceremonies and receptions, dinner parties, drinks receptions, corporate functions and exhibitions. The Trio are happy to tailor their repertoire to suit particular occasions and will work closely with clients to make the live music at an event something exciting and special. The group have a wide range of repertoire including baroque, classical, light jazz, west end show tunes and popular songs. The Trio work extensively in the South East region but will always consider engagements throughout the UK.

For any enquiries please use our Contact us page.

“Their performance was professional, enjoyable and was commented on by everyone who attended the conference. It is refreshing to see and hear musicians who not only take their work seriously but deliver such a high standard of music.”

...such a high standard of music.

Listen to The Thorne Trio

In June 2004 The Thorne Trio launched their debut CD “3” at Criccieth Castle. Recorded at Craig y Nos Concert Hall in the Brecon Beacons, the CD includes pieces from the standard woodwind repertoire as well as audience favourites, and an exciting new piece commissioned by the trio, composed by Dafydd Lloyd Jones – “Rhwydwaith”.

3 is available to purchase for £10 +p&p. To order a copy please get in touch with us through the Contact us page.

“This CD is a wonderful breath of fresh air. The Thorne Trio play with innate musicality and impeccable accomplishment. The individual players have distinctive musical personalities but they also blend superbly and create a beautifully balanced sound. The stylistic sensitivity is evident throughout a varied programme and the CD as a whole presents an hour of pure pleasure. More please!”
(Geraint Lewis, BBC Radio Cymru)

‘Recital’ is the trio’s second CD recorded in Ealing. It includes French and English works, not just for trio but in different combinations. The trio felt it was time and were very keen to record another CD as they continue through their second decade as a trio and with French and English works being such large contributors to their repertoire, it seemed apt that this should be the theme for ‘Recital.’

Recital is available to purchase for £10 +p&p. To order a copy please get in touch with us through the Contact us page.

The Thorne Trio in Photos

Live Music Now aims to promote the enjoyment and experience of live music amongst people who would not normally have access to it, and to assist gifted young professional musicians at the outset of their careers.

Music in Hospitals is a registered charity, established in 1948, which brings live music to adults and children whose lives are restricted by long-term illness or disability.

Established in 1968 by an anonymous donor, the Martin Musical Scholarship Fund has helped countless young players, including Tasmin Little, Kennedy and Steven Isserlis, to bridge the gap between study and a professional career by providing financial assistance in addition to recital opportunities.

Thank you for your interest in the Thorne Trio.

Should you require any further information, please use the contact form below. Alternatively, email us at thethornetrio@hotmail.com